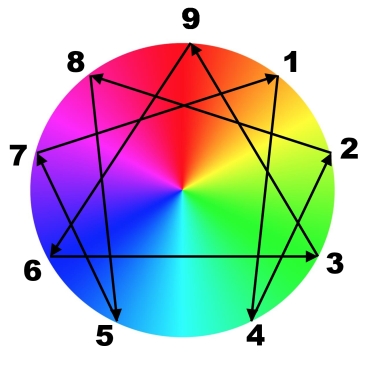 The word ‘enneagram’ is a relatively new word for an old idea.  ‘Ennea’ is Greek for ‘nine’ and ‘gram’ refers to it being a diagram.  It describes nine basic personalities, although in practice the personalities are seen as dynamic and not pigeonholes.  All the personalities shade into each other, making the human race a bit like a circular spectrum.  Furthermore, each personality predictably moves into another personality when the person is under stress.  This is the significance of the arrows, and the direction of the arrow shows which type a personality moves into.

Each personality type has two arrows, one leading away (the ‘stress arrow’) and one leading towards it (the ‘security arrow’).  Five Personalities in One explains more about how this works.

Each of the  nine personalities is associated with a number.  The numbers are a universal language so people can discuss it without ambiguity.  There are several ‘schools’ of the enneagram and different teachers tend to use slightly different names for the personalities.

It is also useful to use numbers because they are emotionally neutral.

A further reason for using numbers when learning the enneagram is that it avoids bias in the mind of the learner.  It avoids the temptation some may feel to be attracted or repelled by the name itself.

The nine personality types are grouped into three triads of personalities with similar drivers.  They are further described in What is the Enneagram?